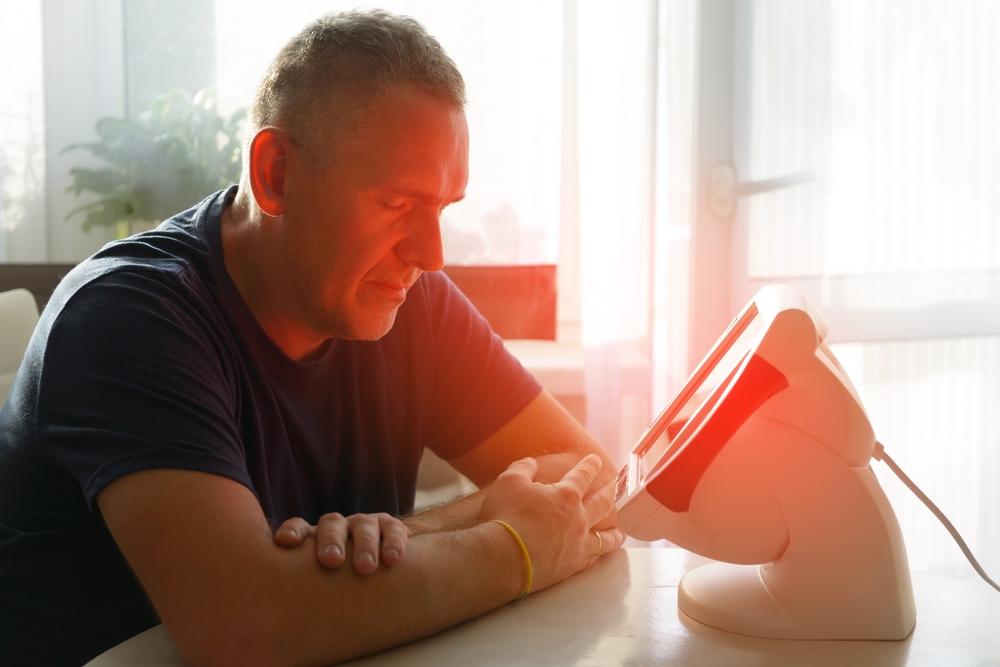 Some of the most troubling ailments faced by our society, like high blood pressure, diabetes, cardiovascular disease, dementia, and chronic pain, might be improved by a form of infrared (IR) light therapy. Light therapy was originally developed by NASA in the 1980s to grow plants in space but subsequently was found to have human health benefits.

What exactly is infrared light? Infrared waves, or infrared light, are part of the electromagnetic spectrum. People encounter Infrared waves every day, but it is a type of radiant energy that's invisible to human eyes but that we can feel as heat like the warmth from a sunny day.

This article will discuss IR therapy's many evidence-based health benefits and how integrative medicine practitioners use it in practice.

What is Infrared Light Therapy?

This can be a confusing topic because IR therapy is known by various names, including photobiomodulation, low-level light therapy, near IR, far IR, and waon therapy. Some people use red light therapy interchangeably with IR therapy, although each wavelength has different benefits.

The electromagnetic spectrum consists of the colors of the rainbow: red-orange-yellow-green-blue-indigo-violet. These colors the human eye can perceive range from the longest wavelength of visible light (red) to the shortest (violet). IR light has a longer wavelength than red light and is invisible to the human eye. It is divided into near, mid, and far based on wavelength.

Red light therapy (RLT) is a treatment that uses low wavelength red light that helps mitochondria work more efficiently, such as repairing skin, boosting new cell growth, and enhancing skin rejuvenation. For this reason it is commonly used in medical and spa settings.

Red light therapy is suggested to help the skin by:

Photobiomodulation is also known as low-level light therapy or near-IR light therapy. The mechanism of action is best understood for this type of light therapy. When near IR light is applied to a body site, a protein (cytochrome C oxidase) in the energy powerhouses of the cell (mitochondria) becomes activated. This triggers a cascade of events allowing energy (ATP) to form rapidly. This energy production promotes yet another cascade of events leading to beneficial effects, including tissue healing, reduction in inflammation, and pain relief.

It is unclear if the mechanism of action between the two types of far IR light is the same, and for the rest of this article, only the first type of far IR energy (from saunas or powered sources) will be considered.

One hypothesis regarding the mechanism of action of far IR light involves an increase in nitric oxide production, leading to dilation of blood vessels (vasodilation) and improved blood flow. Another involves the activation of mitochondria through a complex method that is beyond the scope of this article.

Waon, a Japanese word meaning "soothing warm therapy," is a specific type of far IR therapy. It consists of treatment in a far IR sauna at 60°C for fifteen minutes, followed by resting on a bed outside the sauna with warm blankets for another thirty minutes.

To date, infrared therapy studies are small and limited. Although more studies are needed, the following health benefits have improved after red light and infrared light therapy treatments.

Far IR light may provide benefits for those who have high blood pressure and impaired blood flow through major arteries (endothelial dysfunction). This beneficial effect is possibly due to increased nitric oxide production, as nitric oxide is a known vasodilator.

A study looking at 25 males having at least one cardiac risk factor showed a significant improvement in endothelial function, blood pressure, and fasting blood sugar after only two weeks of daily Waon therapy.

CHF is a condition where the heart fails to pump blood adequately. This leads to congestion, or excess fluid, in the lungs and legs. Patients with CHF often feel short of breath, fatigued, have swollen ankles, and have a poor quality of life.

A randomized controlled study of over 140 patients evaluated ten days of Waon therapy in patients with CHF. There were significant improvements in shortness of breath, an increased ability to walk for six minutes, and a decrease in a blood marker (BNP) commonly elevated in patients with CHF.

Long-term follow-up of patients with CHF treated with Waon therapy is also very promising, demonstrating a significant decrease in cardiac events in the treatment group compared to the control group.

Peripheral arterial disease is caused by damaged arteries in the limbs, usually due to atherosclerosis. These damaged arteries do not allow proper blood flow from the heart to the distal extremities (usually the legs). This can cause pain with activity (claudication), weak pulses, cool extremities, non-healing ulcers, and discoloration of the affected limb(s).

Fasting blood sugar can be improved after far infrared therapy, possibly due to an increase in blood flow, much like what occurs during exercise, that facilitates glucose uptake from the blood.

Low back pain is one of the most common types of pain reported by patients. It can lead to disability, poor quality of life, and time off work.

A randomized, double-blind, placebo-controlled study of 39 patients evaluated near infrared therapy and found a significant reduction in lower back pain at the end of the seven-week experimental period.

Pain scores in the experimental group improved from an average of 6.94/10 at the start to 3.05/10 by the end of the study. A similar reduction was not seen in the placebo group.

Chronic pain of any cause can be disabling - affecting mood, quality of life, and livelihood. Far infrared therapy positively affected livelihood two years after the treatment: 77% of patients receiving IR therapy returned to work compared with 50% in the control group.

An open-label study of 13 female patients with fibromyalgia evaluated the use of Waon therapy. There was a significant reduction in pain during the therapy and at the 14-month follow-up observation.

Far infrared therapy has been shown to improve postoperative pain and provide a better range of motion after arthroscopic rotator cuff repair surgery compared to controls who did not receive IR therapy.

A placebo-controlled study evaluated the effects of near IR and red light therapy on 18 patients having hip replacement surgery due to osteoarthritis. Pain and inflammatory cytokines (TNF-⍺ and IL-8) were significantly reduced in patients who received IR therapy.

Red light and near IR light can penetrate the human scalp and skull and may be helpful as an adjunct therapy in those with brain diseases. It is thought that near-infrared light positively affects the brain by:

Conditions like dementia cause concern, as people fear losing memories, the ability to care for themselves, and losing independence.

Studies using infrared therapy are emerging. IR therapy, often used for cognitive impairment, consists of transcranial (like a helmet or electrodes worn on the head) application and intranasal (inside the nose) application. Although more extensive studies are needed, a pilot trial of 8 patients with dementia evaluated home therapy using near IR treatments. Patients receiving the treatment demonstrated significant improvements in several markers of cognitive functioning, including better cerebral blood flow, compared to controls. Although it was a small study, the treatment group had no adverse side effects, suggesting that implementing infrared therapy in patients with dementia may have little to no downside.

A recent systematic review evaluated ten studies of photobiomodulation conducted in patients with dementia. All studies were positive and adverse events were absent.

Light therapy has been shown to improve skin rejuvenation without skin trauma that lasers or intense pulsed light therapies can cause. A randomized, controlled study of 136 patients demonstrated that red light therapy was as effective as light therapy with a broader range of wavelengths (from yellow to near IR). The treated patients reported significantly improved skin complexion. There was also an increase in collagen density as measured by ultrasound.

A recent meta-analysis demonstrated that red and near-infrared light therapies were significantly effective at treating androgenetic alopecia and near IR light for treating alopecia areata. Proposed mechanisms of action include enhanced secretion of growth factors and proliferation of the cells that promote hair growth (dermal papilla cells).

IR light therapy, especially in a sauna setting, can cause dehydration, drops in blood pressure, decreased body weight, and increased urine volume; these can be exacerbated when taking medications like diuretics or antihypertensives. Caution is warranted, as is a discussion with your healthcare provider, to ensure that medications can be titrated as needed. Conditions including unstable angina, a recent heart attack (myocardial infarction), or severe heart valvular disease (aortic stenosis) should be considered contraindications to sauna use.

What to Look for When Choosing IR Light Therapy

There are several considerations when choosing the type of IR or red light therapy that is best for you. It is important to note the wavelengths mentioned above and compare them with the red or infrared light you purchase for self-use to get the most therapeutic benefit from it.

The following wavelengths are what I suggest for my patients:

*Note: Some IR devices are "full spectrum," meaning they can generate far, mid, and near IR wavelengths.

The second consideration is what device you will use for infrared therapy. Most of the research that has been done to date is on infrared saunas and transcranial helmets, so it is difficult to know if home devices like IR blankets, lamps, and handheld devices are comparable to more powerful sauna devices.

The third and fourth considerations are cost and space. Handheld devices and blankets will be the least expensive and take up the least space. Full spectrum saunas are the most expensive, may require electrical modifications in your home, and can take up considerable space.

A final consideration is an electromagnetic field (EMF) emission. Many manufacturers specifically advertise low EMF devices, so be sure to inquire before purchasing if this is an important consideration for you.

Research into IR light is exciting as many different uses for improving human health are being discovered. IR light therapy's notable benefits include cardiovascular, metabolic, skin, and brain health, as well as pain relief.