Case Study: What Thomas Did To Finally Fix His Seasonal Allergies 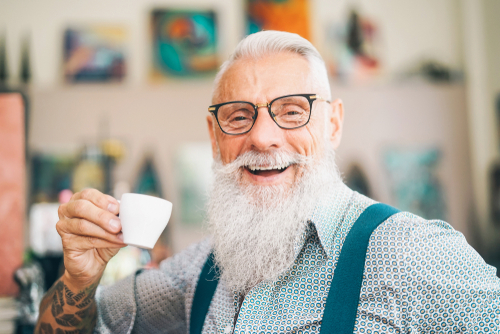 Seasonal allergies affect over 20 million people in the United States each year. With symptoms like sneezing, nasal congestion, itchy eyes, and rashes, it's no wonder Americans spend billions of dollars annually on over-the-counter and prescription treatments for them.

Seasonal allergies can put a damper on outdoor plans and even make entire months of the year unenjoyable for those suffering from them.

Luckily, a Functional Medicine approach to seasonal allergy relief can be effective, safe, and cost-efficient, even if what you've tried before hasn't worked. If you're looking for proof that treating the root cause of seasonal allergies works, you'll definitely want to read Thomas's story below!

Thomas is a 57-year-old cis male who initially presented to our clinic for help with severe episodes of fatigue that had developed suddenly over the past month. He also had a long history of seasonal allergies, for which he took four medications (Allegra, Mucinex, Azelastine, and Flonase) daily.

Thomas was a CEO who came to see us because his fatigue symptoms were interfering with his work and home life, and he hadn't been able to find answers. These attacks happened at random times of the day and were seemingly unrelated to physical activity, water or food intake, or sleep. Over the past month, Thomas had begun experiencing what he felt were episodes of hypoglycemia. Seemingly out of nowhere, he'd feel shaky, weak, exhausted, and have to lie down. The only thing that could help him feel better during these episodes was lying flat and ingesting some form of sugar, like juice. Understandably, Thomas assumed that blood sugar was the issue, but strangely, an extensive amount of workup suggested his blood sugar was actually normal throughout these episodes. The other common causes of this type of rapid onset fatigue - hypotension (or low blood pressure) and acute dehydration - had also been ruled out. Thomas and his doctor felt stuck.

Thomas came to our clinic looking for answers. What was happening to him? And why? How could he prevent these attacks?

Thomas's seasonal allergies were severe but understandably a secondary issue when he initially presented to our clinic, given the acute nature of his fatigue attacks. Since he reported them in his intake, we decided we wanted to heal those, too. In fact, his seasonal allergies gave us an important clue that eventually enabled us to solve his case of fatigue.

Thomas' family ate a whole foods diet, and he exercised regularly. His wellness routine included adequate sleep time, relaxation, and stress reduction. Thomas had a history of Lyme disease, kidney injury, and bronchitis, but these conditions were resolved and hadn't affected him in years. Aside from his four allergy medications, he took no other medications daily. Thomas' fatigue was a medical mystery, but thankfully, we were able to solve this case using clues from his intake and the nutrient analysis, dietary recall, and lab work you'll see below.

At his intake, the nutrient analysis of Thomas's typical diet revealed that he tended to consume inadequate total energy, carbohydrates, proteins, omega 3's, fiber, and most vitamins and several minerals, including calcium, magnesium, and potassium each day. Additionally, Thomas consumed an abundance of highly allergenic and high histamine foods, drank alcohol approximately two days per week, including beer and wine, and ate out frequently at restaurants for meals.

Thomas's primary care had already ordered a preliminary workup before he came to see us, which included a CBC, CMP, Lipid panel, Thyroid panel, HbA1c, Lyme disease screen, DHEA, and Testosterone, all of which were within normal limits.

We ordered food sensitivity testing through RUPA labs and referred Thomas to an allergist to be evaluated for food and environmental allergies. Additionally, we began monitoring his sleep using an Oura ring to track deep, light, and REM sleep to gain more insight into his recovery.

Thomas's allergist did a wide variety of testing and found no positive results for IgE food allergies. His environmental allergen reactivity levels were mild, despite significant symptoms.

Thomas's allergist suggested that he attempt to temporarily discontinue his medications to see what his baseline symptoms were since he had not had a significant period without taking them in years. She felt confident that the more natural antihistamine protocol we'd prescribed for him (below) would work.

Thomas' allergist also screened him for tryptase, which was within normal limits. Tryptase is an enzyme released from mast cells during an allergic reaction. It can be elevated if the person is having an allergic reaction at the time of the blood draw, but more than 50% of the time comes back normal - even when a person is having histamine-related issues.

As a result, many functional medicine doctors diagnose histamine issues based on symptoms (rashes, hives, urticaria, unstable blood pressure, tachycardia, diarrhea, hypotension, fatigue, itching, and more, particularly when triggered by exposure to an allergen) rather than solely relying on blood tests results. Thomas's allergist explained this to him and suggested that she still thought allergies were playing a role in his symptoms, even though his tests were inconclusive. That led us to the allergy/histamine protocol that ended up helping Thomas finally get allergy symptom-free.

Thomas had two significant IgG and IgA food reactions to cow's dairy and chicken and duck eggs. Significant food reactions are always interpreted within the context of the client's symptoms, diet, and more.

In Thomas' case, we could reliably assume that any class III or above IgG reactions or IgA reactions above class I were worth investigating, as he only has two of these. In general, I only have clients eliminate the foods they're reacting to above a class II.

Thomas’s sleep tracking revealed that he was waking up over twenty times per night. We sent him for a sleep evaluation and prescribed supplements to help him get more restful sleep pending those results, which we are still waiting for due to long waits for specialists in our area.

I suspected that Thomas’ symptoms were likely due to the combination of poor histamine tolerance, food sensitivities, and years of poor sleep from his adrenal fatigue. I also expected that several nutrient deficiencies were contributing to both symptoms and that if we could replete him, decrease histamine exposure and production, and remove triggering foods, he would heal.

This is particularly true because many of the nutrients he tended to under-consume are required for phase I and phase II liver detox and optimal liver health, which is needed to break down histamines in the blood fully. You’ll notice that many of these nutrients are amino acids and vitamins, which Thomas did not consume enough of routinely through his diet and was not supplementing.

To help Thomas heal and thrive, we did the following:

Thomas's individualized nutrition plan was designed to be healthy, easy to cook, and fun to eat. It was meant to correct his inadequate intake of total energy, carbohydrates, proteins, minerals, vitamins, and omega 3'

When clients temporarily eliminate cow dairy, they often have an inadequate calcium intake for 2-3 weeks. If they choose to avoid dairy long-term, we have them fix this dietary insufficiency with supplements or other calcium-rich foods like tofu, salmon, and even fortified orange juice. As you can see, Thomas’ plan allowed him to get 40 grams of fiber, 6 grams of omega 3’s, and all amino acids, vitamins, and minerals daily except calcium.

Now, what we prescribe is not always what people do! This is why we track nutrient intake over time dynamically with many of our clients to ensure we have a true and accurate picture of what they’re consuming.

The nutrient analysis below reveals that Thomas has met >90% RDI for these nutrients except potassium, calcium, magnesium, and carbohydrates each day for the past year. This does not include many of his supplements, which were designed to fill these gaps in addition to his diet. This is a significant improvement from where he started, and - most importantly - this is a sustainable way for Thomas to eat and live.

The natural antihistamine protocol we prescribed, including DAO, DHist, liver detox formula, multivitamin, and a nutrient-replete, high fiber, low histamine diet, allowed Thomas to stabilize his seasonal allergy symptoms within a few weeks. He no longer takes medication and is now symptom-free!

Our elimination/challenge protocol allowed Thomas to discover that eggs were causing his symptoms of intense fatigue. Undiagnosed food sensitivities can cause various reactions, including brain fog and extreme fatigue. As long as he avoids eggs, he no longer gets the fatigue attacks he initially presented with.

Thomas still uses the liver detox formula on days he drinks to help his liver metabolize histamine and alcohol, takes a multivitamin, and practices allergy and food/beverage histamine hygiene. As a result, he has total control over his symptoms and is now empowered to thrive.

In this case, Thomas used a combination of a food-as-medicine plan, good nutrition, and supplementation to eliminate his seasonal allergy symptoms, discontinue his medications, and eliminate his episodes of fatigue. He was able to discontinue four common allergy medications (Allegra, Mucinex, Azelastine, and Flonase) and is still symptom-free. We hope his story inspires you to know that you and your loved ones can address seasonal allergies naturally, too and encourages you to explore food sensitivity testing if you have similar symptoms.

*Note: The clients' name has been changed to protect his privacy. All other details are the same!