It's Time To Start Treating Coffee Like A Health Food 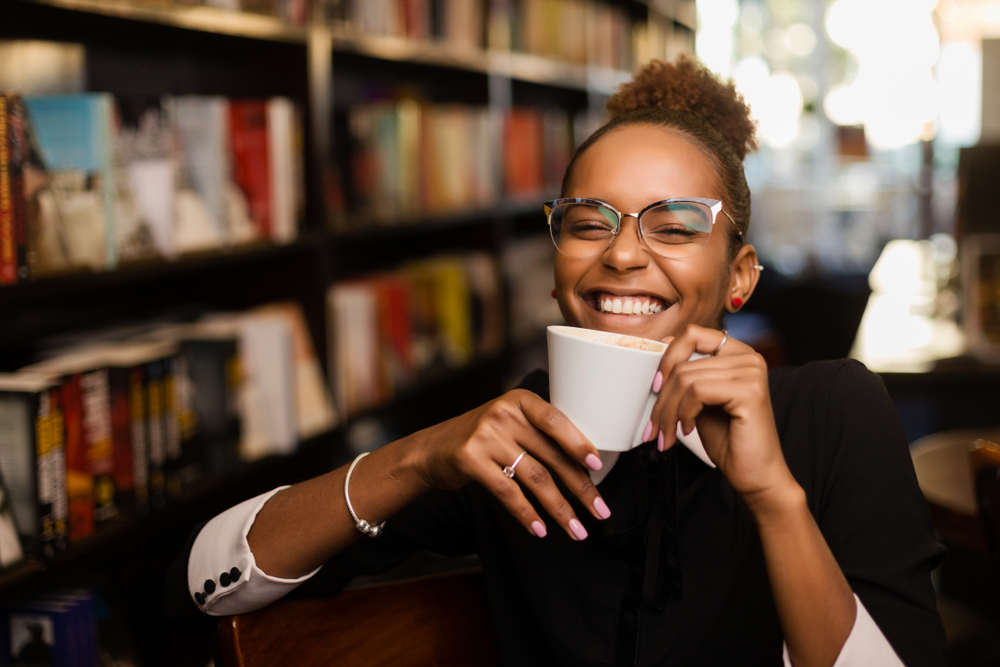 Can you imagine a morning without a glorious cup of coffee? So many of us rely on this hot beverage to start the day. In fact, 75% of Americans over 20 have reported being coffee drinkers.

But is this beloved drink healthy?  The health conscious group has had questions and concerns over the years, as headlines flip flop frequently.

Based on the overwhelming love for this morning cup of brew, we thought it was essential to sort through all the evidence and give the reader an understanding of all the potential pros and cons of drinking coffee so you can make the best decision regarding this widely consumed drink.

Coffee is thought to have originated from a region in Ethiopia called Kaffa over 1000 years ago. There is a story that states a goat herder, Kaldi, discovered coffee after he noticed that his goats were eating the berries and had so much energy hours later that they did not want to sleep at night.

Kaldi reported his findings to the local monastery. Together they tried the berries and found that the berries kept them alert through the long hours of evening prayer.

Approximately 600 years later, the first coffee shop opened in Constantinople. By the early 17th century, coffee had spread from the Arabian Peninsula to India and then to Europe, where it was firmly established as a global commodity.

By 2015, domestic coffee consumption in the United States reached an estimated 1.4 billion kg a year, making it the second largest coffee market in the world after the European Union.

There seem to be many scientifically backed health benefits from drinking coffee. Here are the top 10:

As we age, certain brain functions may naturally decline, and certain disease states may start to present. However, coffee may be a valuable tool for prevention. Alzheimer's Disease is the most common neurodegenerative disease plaguing the elderly. However, cohort studies have shown that coffee consumption was significant in preventing the risk of Alzheimer's.

Parkinson's Disease, the 2nd most common neurodegenerative disease, was also found to benefit from coffee consumption. There was a reduced risk of developing the disease and a reduction in disease progression in those who were already diagnosed and drank coffee regularly.

Cardiovascular health benefits associated with coffee have long been studied. Recent studies look promising for those who are hoping for some heart health benefits. For example, 3-5 cups of daily coffee are linked to a 15% reduced risk of cardiovascular disease. Also, higher coffee consumption was correlated in 3 studies to lowering the risk of heart failure. Furthermore, at 3-4 cups of coffee daily, research shows a 21% lower risk for stroke.

Research suggests drinking coffee can reduce the risk of Type 2 Diabetes. Although the exact mechanism is not yet known, the same study indicates the possibility of the modulation of adenosine receptors, which are the receptors that may be responsible for affecting insulin sensitivity. However, coffee's positive effects on microbiome diversity were noted as a possible reason for this reduced risk.

A different study suggested an additional protective mechanism that may be going on. It mentions that coffee intake appears to have preservational effects on functional beta cells in the pancreas, which could explain how coffee helps prevent further damage in those with Type 2 Diabetes.

Coffee can prevent and reduce fat storage, according to recent research. The two proposed mechanisms are the suppression of adipocyte functions and the support of the gut microbiome. A lower body fat percentage in daily coffee drinkers has been associated in both women and men.

Liver health is another area where coffee may be able to assist significantly. Improved liver enzymes (ALT, AST, and GGTP) were associated with those who regularly consume coffee. Plus, this same study suggested that more than 2 cups of coffee per day could lower the incidence of fibrosis, cirrhosis, and hepatocellular carcinoma rates in those with diagnosed liver diseases.

Coffee is recommended post abdominal surgery to help restore colonic contraction and function. The recommendation comes from the observation that coffee can stimulate the peristalsis of the colon. That same meta-analysis also noted that although many believe coffee to be the culprit for intensified GERD symptoms, the data does not support that to be the case.

Different research looked at daily coffee intake and suggested that it was linked to a 26% lower risk of developing colorectal cancer, leading to the overall consensus that coffee is beneficial to the gastrointestinal tract.

A randomized controlled trial showed that drinking a dark roast coffee blend (500 mL daily) had a notable protective effect on the integrity of the human DNA in both men and women compared to a group that only drank water.

Caffeine has various pharmacological effects, but one many aren't aware of is that it is a mild bronchodilator (which causes the widening of the bronchi). It also reduces respiratory muscle fatigue.

Coffee is also used as an ergogenic aid, which means that it can enhance physical performance.

Coffee can extend our lives by reducing mortality. Specifically speaking, moderate coffee intake of 2-4 cups per day was correlated with a decrease in all-cause and cause-specific mortality compared to individuals who did not drink coffee.

How Much Coffee is Safe to Drink a Day?

There is a lot of evidence suggesting that coffee is quite beneficial for our health. However, like anything in life, the dose determines the benefit or harm. Most studies show that the sweet spot for gaining health benefits from coffee consumption for most adults lies between 3-4 cups per day. However, it's important to note that many of these studies were observational rather than controlled studies where cause and effect could be determined.

Another important piece to note, though, is that it's not only the amount per day but the timing per day that can affect health. Caffeine in coffee can interfere with sleep. According to research, most people need a minimum of 6 hours between coffee intake and sleep (with some needing longer than that depending on their body and caffeine metabolism).

Who Should Avoid Coffee?

Coffee may not be a healthy choice for everyone. Just as with any health recommendation, individualization should always be noted.

For example, coffee, especially in high doses of several cups per day, should be restricted in children, specifically during puberty. Coffee has been shown to affect this age group by stunting the growth of the adrenal glands.

Those with Irritable Bowel Syndrome (IBS) should likely stay away from coffee since coffee has been shown to increase motor response in the distal colon. The effect of caffeine on gastrointestinal symptoms may be related to its impact on colonic motor activity. This was shown in a study that coffee induced the need to defecate in nearly one-third of healthy participants. For those suffering from IBS-D, an increased colonic response can affect their quality of life. The good news is the increase in colon motor response only last approximately 30 minutes from consumption, so it shouldn't be a factor in IBS symptoms for the rest of the day. If you have IBS and choose to drink coffee, drinking it before any daily events is recommended so you will have time to empty your bowels.

Anxiety and panic attacks can increase in those with panic disorder who consume 5 cups of coffee daily. Caffeine intake should be reduced or avoided to those prone to anxiety.

Individuals with hypertension should also use caution with coffee consumption. In this population, especially elderly individuals, coffee was associated with uncontrolled blood pressure.

What Type of Coffee Should We Buy?

Since we are promoting coffee for its health benefits, it's vital to talk about organic vs. conventionally grown coffee. Organic coffee has higher levels of bioactive compounds in comparison to conventional coffee. It is also grown without using fertilizers and pesticides.

Pesticides have been associated with many health-related issues, including neurological disorders, autoimmunity, gut dysbiosis, cancers, congenital disabilities, reproductive harm, immunotoxicity, and disruption of the endocrine system. To avoid these toxins, it's crucial to focus on organic produce.

Mycotoxins, aka mold, are also a common topic that is addressed when it comes to purchasing coffee. A study looking at the mold content of green coffee showed mold in 94% of beans, 100% of ground and instant coffee, and 55% of dietary supplements. Some companies heavily test for mold in their coffee, and it would be worthwhile to seek out the companies that are mold aware to avoid it. Decaf coffee tends to be higher in mycotoxins.

Fair trade coffee is also a specification to look into. While there won't be much difference in the health benefits of the consumer, there will certainly be health benefits to the grower. In fact, fair trade coffee growers have been shown to have better household nutrition for their families due to better income. With more and more coffee companies choosing fair trade beans, this should be a no-brainer choice to help others lead healthier lives as well.

Darker roasts do not contain a higher level of caffeine than lighter roasts. Lighter roasts actually have a slightly higher concentration.

Coffee grinds should not be brewed more than once. Brewed grinds taste bitter and may no longer produce a pleasant coffee flavor.

While water is always the best choice for quenching your thirst, coffee can count toward your daily fluid goals. Although caffeine has a mild diuretic effect, it is offset by the total amount of fluid from the coffee. Of course, that doesn't mean you should avoid your daily H20 requirements.

Coffee is one of the most commonly loved drinks throughout the world. While specific groups of people should use caution around drinking coffee and potentially avoid it, most people would benefit from a few cups of joe per day.

From heart to brain health to DNA health and more, coffee has been shown to affect the whole body positively and can even help extend life. Benefits are increased when the highest quality sources, such as organic, mold-free, and fair trade, are used.

There are a few substances out there that are both beneficial to overall health and also enjoyable. So, it's welcome news that coffee fits into both categories (at least for most people).