4 Things That Helped Laura Get Her Rheumatoid Arthritis Under Control 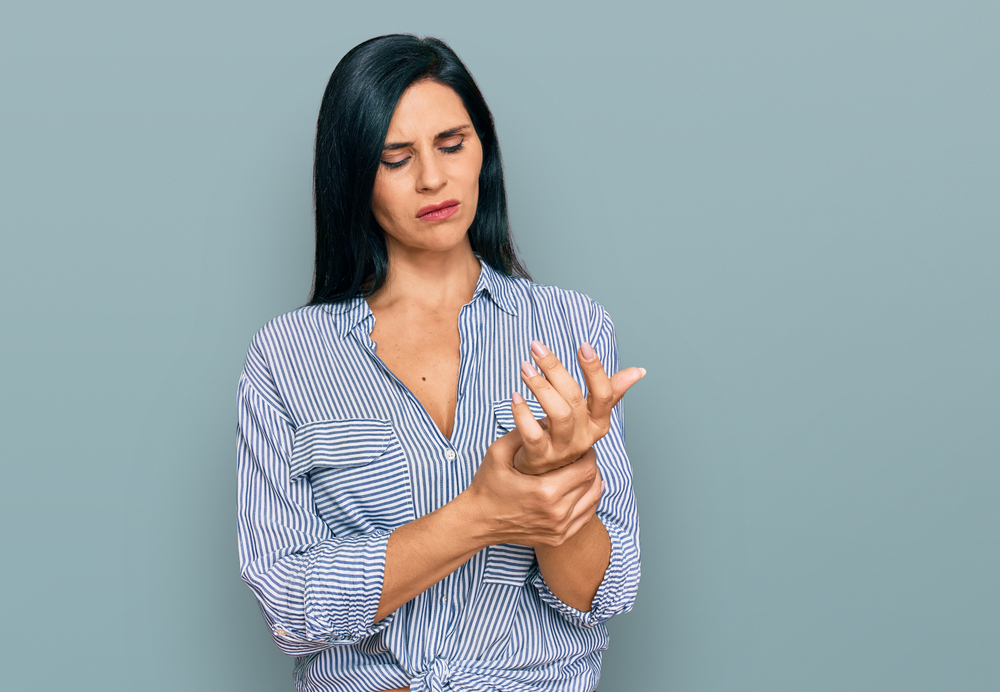 Rheumatoid arthritis is an autoimmune disease impacting 1.5 million individuals in the United States. While the disease primarily affects the joints, rheumatoid arthritis (RA) can also lead to complications with the lungs, eyes, and overall coordination and mobility. Several risk factors can contribute to RA, including genetic predisposition, environmental factors, and lifestyle stressors, and women are two to three times more likely to develop the condition. A functional medicine approach can help you reduce inflammation and narrow down inflammatory factors that could be contributing to RA progression and flare-ups.

Lauren* was a 45 yo female complaining of pain, swelling, and limited mobility in her wrists and, to a lesser extent, in her knees. She initially rated her pain as a 7/10 on a VAS (Visual Analog Scale). She was diagnosed with rheumatoid arthritis six years ago and has been to various doctors and practitioners to help her adjust her lifestyle. In those six years, she had lost twenty pounds, tried a variety of supplements and natural remedies (including acupuncture, physical therapy, and homeopathy), and adopted an anti-inflammatory Mediterranean-type diet that she followed around 80% of the time.

Lauren had “always” had digestion troubles, but she had managed them in the past by avoiding certain foods or taking supplements like Magnesium or digestive enzymes. At the time of her initial visit, she had been dealing with bloating and constipation for about six months which were not responding to her “regular go-to’s.” The only thing currently working for her constipation was laxative-based teas and supplements, which assisted her in having 2-3 bowel movements per week.

She had tried immunosuppressant therapy (methotrexate) at the time of her diagnosis for about five months but stopped due to side effects (hair loss, dizziness, migraines).

She worked as an art teacher, and her current symptoms made it difficult to work with certain mediums in class.

Lauren has had regular menstrual cycles since she was a teenager. However, she suspected she was in perimenopause as she had started experiencing lighter bleeding, mild hot flashes, and trouble sleeping.

Otherwise, Lauren reported she was in good health and had good energy levels, stable moods (though she admitted feeling anxious and stressed in the past year or so about her prognosis), and a solid support system at home.

Lauren had tried topical anti-inflammatory prescriptions for her wrists, cold therapy, and occupational therapy to help with mobility. She felt these didn’t have much impact, though the cold therapy felt good during a session. She had tried supplements like turmeric, omega-3 fish oil, and probiotics but didn’t know if they were helping. In fact, she felt like the probiotics often worsened her bloating when she took them.

Her diet included a lot of vegetables, fresh fruit, fish, chicken, beans and legumes, gluten-free whole grains, and occasionally dairy and alcohol when she and her partner went out on weekends.

She tried to keep her stress levels low but admitted she’d been feeling stressed and anxious about her health and wondered if that was impacting her sleep. She was able to identify that her wrists flared up more when she was doing a lot of clay work/sculpting, which required more movement at those joints. Lauren was walking most days and did Pilates 1-2x per week for exercise.

Lauren’s lab work points to a few core issues that are contributing to her ongoing inflammatory symptoms, as well as her bloating and constipation:

Lauren’s stool test showed low pancreatic elastase, indicating suboptimal digestive enzyme function and likely malabsorption. This can lead to issues with absorbing the nutrients from her food and contribute to symptoms like bloating as the body can’t properly break down food. Her test also showed elevated beta-glucuronidase levels, a marker linked to dysbiosis, higher circulating estrogens, and lower fecal excretion of estrogens in premenopausal women.

Lauren also showed high growth of H. pylori spp, indicating an infection in the stomach that was likely interfering with digestion and absorption and contributing to inflammation in the GI tract, even though she wasn’t having typical “stomach-based” symptoms. Additionally, she showed a high growth of Candida Albicans and Klebsiella spp., which are opportunistic pathogens, with no growth of beneficial microbes such as the Lactobacillus and Bifidobacterium spp, indicating dysbiosis in her microbiome. An imbalanced microbiome can lead to bloating, constipation, inflammation, and a slower detoxification ability (1, 2). Dysbiosis has been linked to rheumatoid arthritis progression (3).

Last, Lauren also showed elevated zonulin levels, a biomarker that assesses the integrity of the gut lining. Zonulin is a peptide that plays a role in the structure and function of the tight junctions of the epithelial lining; these junctions are what allow different things to pass through the gut lining (4).

Lauren’s labs showed low or borderline low levels of essential micronutrients, including vitamin D, zinc, magnesium, and ferritin (iron). These micronutrients are necessary for immune function and quelling inflammation, and ongoing inflammation in diseases such as RA can, in turn, cause low iron (anemia) (5).

Lauren had a high omega-3 index, elevated CRP, CCP antibodies, Rheumatoid factor, and borderline ANA. These markers indicate ongoing inflammation and autoimmune activity and can be used to help gauge her progress over time. She was also positive for HLA-B27, a biomarker that indicates a genetic predisposition to inflammatory arthritic disease such as RA (6).

Many of the things Lauren had reported eating as part of her current diet, such as chicken, mushrooms, spinach, pineapple, & blueberries, all came back with high antibody levels on her food sensitivity panel. Continuing to eat these foods could contribute to systemic inflammation and her digestive complaints.

While her cortisol levels throughout the day looked okay, her cortisol remained high in the evening, contributing to poor sleep.

Over the course of three months, Lauren implemented her nutritional, supplemental, and lifestyle changes with weekly coaching and support. By our in-depth follow-up at the end of three months, Lauren’s bloating was much improved, and she was having bowel movements almost daily. She had identified that high-stress levels or a poor night’s sleep usually meant she would be constipated the next day. Eating a lot of starches or fruit usually worsened her bloating.

Overall, she was sleeping better once she established a good routine in the evenings. She had some trouble sleeping the day or two leading up to her period and had started to take extra care to rest and unwind by month three once we saw that pattern.

While changing her nutrition took some getting used to, Lauren was able to be pretty consistent with removing the foods that showed up in her testing. We started reintroducing foods in Month three and found that grains, peppers, eggplant, and cow’s milk were still problematic, so Lauren decided to keep them out of her diet for another three months.

Her micronutrients had normalized after we dialed in her nutrition and supplementation.

Lauren saw noticeable less swelling in the wrists, and her physical therapist had done a great job of helping her maintain mobility and get a good routine in place. She was still teaching art and found that if she just modified certain methods, she didn’t add more stress to her body. At the 3-month mark, Lauren rated her pain as a 2-3/10 on the VAS.

Lauren was due to see her gastroenterologist for a repeat endoscopy at six months, and we planned to re-run her comprehensive stool test at that time as well to evaluate her digestive markers.

This case demonstrates how powerful it can be to address chronic inflammatory diseases like RA from a functional perspective. Co-managing Lauren’s case allowed her to have a full support team that looked at her condition from different angles. Her case shows how essential it is to evaluate gut health and function in autoimmune disorders and how a comprehensive plan that addresses stress and lifestyle factors can be helpful in reducing symptoms and flares of chronic inflammatory diseases.

At 24 Sara Had Extreme Fatigue and Overall Low Quality of Life. How One Functional Medicine Doctor Helped Her Get Her Life Back
How Amy Beat Chronic IBS After Suffering For 15 Years
How Ashley Became Migraine Free in Six Weeks With A Root Cause Approach
How Aileen Beat Her Seasonal Allergies By Fixing Her Gut
See All Magazine Articles