Magazine
A Functional Medicine Approach
|
May 6, 2022

10% Of Women Experience Premenstrual Dysphoric Disorder. Are You One Of Them? 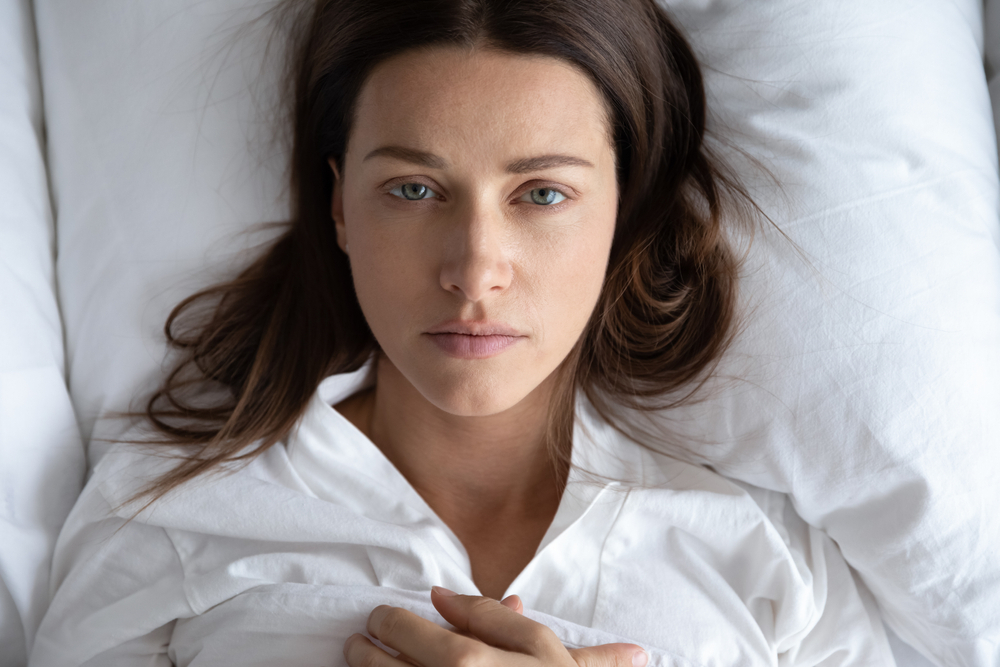 Premenstrual Dysphoric Disorder (PMDD) is a chronic condition very similar to Premenstrual Syndrome (PMS), though its symptoms are much more severe. While PMS is quite common, affecting about 95% of women of reproductive age, the more severe PMDD only affects up to 10% of women who have periods. It is a condition that seems to affect women of any ethnic, cultural, or socioeconomic background.

PMS symptoms such as breast tenderness, headaches, and bloating may also be present in those suffering from PMDD. And while it is also common for those with PMS to experience anxiety, depression, and irritability as part of their symptomatic picture in the 1-2 weeks preceding the onset of the menstrual period, in PMDD, these mental health symptoms are extreme and can profoundly affect and interfere with life each month.

A functional medicine approach to treating PMDD involves a deeper look and understanding of the possible root causes and creating a holistic treatment plan that can significantly reduce and prevent the continuation of these symptoms each month.

PMDD symptoms include PMS symptoms such as breast tenderness, bloating, and irritability. However, PMDD comes with another layer of symptoms that tend to be quite severe:

Also, much like in PMS, these symptoms appear a week or two before the onset of the menstrual period and end a few days after the period starts.

Women who suspect they may have signs and symptoms of PMDD should be evaluated by their ob-gyn for a complete medical history and physical and pelvic exam. Since there are also mental health symptoms present in PMDD, an evaluation by a mental health professional may also be recommended. However, there are no objective measures such as lab work or imaging specific to diagnosing PMDD. Instead, a set of criteria must be met to receive a diagnosis. Keeping a journal to keep track of symptoms each month is a great idea to be able to share with health professionals.

Five or more of the following symptoms must be present:

The exact cause(s) of PMDD is not currently known. However, much like for PMS, some factors are likely contributing to the severe presentation of this syndrome.

Hormonal fluctuations throughout the menstrual cycle are likely contributing to both PMS symptoms and the more severe PMDD symptoms. PMDD symptoms discontinue when hormones stop fluctuating after menopause and during pregnancy, which would confirm this theory. However, what is curious is that these fluctuations are present in every woman who has a period, yet only some individuals experience symptoms. It seems that for some unknown reason, those with PMDD have a sensitivity to these hormonal changes and that it is the sensitivity to the fluctuation that is causing the symptoms.

Progesterone is a reproductive hormone, and allopregnanolone is a metabolite of progesterone. Both fluctuate through the menstrual cycle. They both increase in the luteal phase (2nd half of the menstrual cycle beginning after ovulation) and then sharply decrease at the onset of the menstrual period. This exposure and then quick withdrawal may be associated with PMDD symptoms. In fact, rodent studies show that withdrawal from allopregnanolone, specifically, can induce the symptoms associated with PMDD.

Serotonin is a neurotransmitter, and the estrogen level is associated with the level of serotonin. Interestingly, research suggests that the drop in serotonin in the premenstrual phase, not estrogen, contributes to PMDD symptoms.

Besides the connection between estrogen and serotonin, some other neurotransmitters may play a role in the symptomatic picture of PMDD. Gamma-aminobutyric acid (GABA), an inhibitory neurotransmitter, may be important because studies show that while GABA levels decline throughout the menstrual cycle in healthy women, GABA levels increase throughout the cycle in those with PMDD.

Glutamate, an excitatory neurotransmitter, may also be related to PMDD symptoms. Symptomatic women also seem to have an increased sensitivity to the fluctuation of glutamate during the cycle. Furthermore, cortisol and beta-endorphins have been observed to be lower during both the follicular and luteal phases of those with PMDD. This suggests a possible connection between PMDD and the hypothalamic-pituitary-gonadal axis (HPA-axis).

Vitamin and mineral deficiencies are likely to play a role in PMDD, showing a more profound deficiency than the more mild PMS.

Chemicals that have the ability to interfere with and alter our hormones (endocrine system) are known as endocrine disruptors. There may be an association between endocrine disruptor exposures and the severity of PMS/PMDD symptoms. An observational study looked at a group of college-aged women and their actions to minimize these endocrine disruptors in their personal environment. Those who did take action were shown to have reduced symptoms compared to those who took no action.

Functional medicine has excellent tools to offer help in understanding the root cause of PMDD. This is particularly helpful in this condition because conventional medicine does not currently offer any lab or imaging tests for diagnosis. With functional medicine, we can help identify some possible issues contributing to PMDD.

PMDD likely has a hormonal component. Serum (blood) hormone tests are standard for assessing hormones. The downside of serum hormone testing is that it is a snapshot of the hormone levels during the blood draw. However, because PMDD has to do with the fluctuations and not necessarily the levels at any given time, daily urine testing for hormone metabolites might provide more helpful information than serum alone. The DUTCH Cycle Mapping is a dried urine test that collects daily samples throughout the menstrual cycle, allowing us to monitor those fluctuations.

Because various vitamins and minerals have been shown to be deficient in women with PMDD, testing micronutrient levels is a valuable way to create an individualized treatment plan. Vibrant America's Micronutrient Panel is an excellent choice for evaluating possible vitamin and mineral deficiencies.

If a patient has suspected "leaky gut," it is suggested to do a comprehensive stool test, zonulin (leaky gut panel), alongside food sensitivities testing to narrow down the exact cause of the patient's gut inflammation and permeability.

Endocrine disruptors seem to affect the overall severity of both PMS and PMDD. Evaluating possible environmental exposures might be helpful when trying to understand the source of PMDD further. The Total Tox-Burden panel by Vibrant Wellness is an at-home urinalysis test that tests for total environmental toxins, mycotoxins, and heavy metals.

Because we can't possibly avoid 100% of endocrine disruptors in our environment, it would also be helpful to measure overall liver function to ensure that whatever is coming into the body can be adequately detoxified by the liver. BioReference Laboratories offers a Hepatic Function Panel to assess general liver function.

Pharmaceuticals are often prescribed for the treatment of PMDD.

Selective serotonin reuptake inhibitors (SSRIs) are a class of antidepressants typically prescribed as a first-line treatment for PMDD since mental health can be significantly affected.

There are also various hormonal therapies that may be prescribed. GnRH agonists are a class of hormonal drugs that can inhibit ovulation and periods. This therapy is effective at reducing symptoms. However, it can stimulate menopausal symptoms, so it is less prescribed than SSRIs.

Oral contraceptives can also inhibit ovulation and are occasionally prescribed. However, they have not been shown to be very effective at treating PMDD.

A functional approach to the treatment of PMDD looks closely at the possible root causes in order to develop a holistic plan that can reduce symptoms and possibly prevent them from occurring in the first place.

In PMDD, hormonal fluctuations play a role in the presentation of symptoms. Neurotransmitters are also playing a significant role. They are connected via the gut-brain-microbiome axis. Hormones affect the health of the gut, which in turn affects neurotransmitters. Holistically speaking, we can indirectly address hormones and neurotransmitters by treating the gut and repairing any permeability.

Glutamine is an amino acid known for its healing properties on the gut. Glutamine supplementation, fish oil, and zinc can help repair a leaky gut.

Calcium, Vitamin B-6, magnesium, and L-tryptophan may also help reduce symptoms. Talk with your doctor for advice before taking any supplements.

Vitex agnus castus, also known as Chasteberry, is a safe and effective herbal treatment to reduce PMS hormonal symptoms, though it has not been further researched for PMDD specifically.

Evening Primrose Oil is also considered safe and effective for reducing symptoms. However, studies show that dosing for at least 4-6 months may be necessary to gain the full effect.

Endocrine disruptors are also likely involved in PMDD. Reducing your exposure to endocrine disruptors is a critical step. The Environmental Working Group is an excellent resource for learning how to reduce these exposures in daily life.

*Note that you should never take supplements without guidance from a healthcare professional. You should work with an integrative healthcare provider to set up the best plan for your root cause.

Premenstrual Dysphoric Disorder (PMDD) is a chronic condition that is a severe form of Premenstrual Syndrome (PMS). It is debilitating and can consistently negatively affect women's lives each month. Because it is a subset of PMS, it can include all of the symptoms of PMS as well. However, it is differentiated in the fact that it comes with severe psychological dysfunction.

Functional lab tests can be beneficial when understanding the possible root causes. Because functional medicine helps us look deeper, we can form holistic treatment plans tailored to the individual.

Website
Dr. Christie is a Naturopathic Physician and Licensed Nutritionist. She specializes in Women’s Health specifically fertility, hormonal balancing, and metabolic health and uses a holistic and functional medicine approach to care.
Order from 25+ labs in 20 seconds (DUTCH, GPL, Genova & More!)
We make ordering quick and painless — and best of all, it's free for practitioners.
Sign up free
Browse the lab catalog