Why Do Some Women Get Ovarian Cysts? 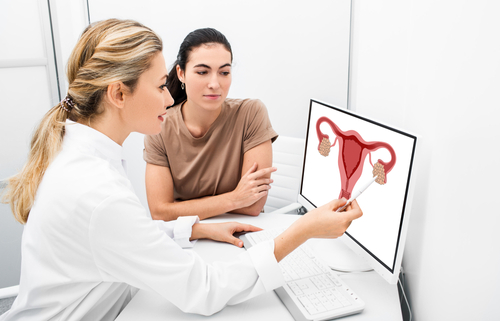 Ovarian cysts are a common condition affecting females, both premenopausal and postmenopausal. They are fluid-filled sacs found in or on the surface of the ovary. About 8-18% of women have ovarian cysts. However, because many women have asymptomatic ovarian cysts that resolve on their own, this statistic may actually be larger.

Most ovarian cysts result from normal ovarian function and will resolve without any further complications. The majority of these cysts are benign (only 13-21% are malignant), and having ovarian cysts is not related to a future risk of ovarian cancer.

Occasionally ovarian cysts can burst or lead to a more severe condition called ovarian torsion. These situations may be quite painful and possibly concerning, and those who suspect this is going on should seek medical help.

What Is The Main Cause of Ovarian Cysts?

Many ovarian cysts occur when the corpus luteum is developing, and this can be a naturally occurring and self-resolving condition with no symptoms. However, there are four other leading causes and risk factors for more potentially complex ovarian cysts: hormonal imbalances, endometriosis, pregnancy, and pelvic infections.

When the reproductive hormones are imbalanced, the ovaries aren’t receiving the expected signals, and an ovarian cyst can occur. PCOS is caused by a hormonal imbalance that can cause multiple cysts on the ovaries.

Endometriosis is a common risk factor for ovarian cysts. When the endometrium travels and grows outside of the uterus, it can potentially implant on the ovary, causing a cyst to form.

Pregnancy may also be the cause of an ovarian cyst. Much like during a typical menstrual cycle, when the egg is released from the ovarian follicle, a corpus luteum cyst can form. However, if pregnancy occurs during that cycle, the cyst can continue to grow throughout the pregnancy, usually resolving on its own either during or shortly after pregnancy.

Pelvic infections can lead to ovarian cysts if and when the infection reaches the ovaries.

Overall, the most common risk factor for an ovarian cyst is if there were any previous cysts.

There are two main categories of ovarian cysts: functional cysts and complex cysts.

Each month during reproductive years, follicles in the ovaries are responsible for releasing eggs. These follicles are cyst-like, and if they keep growing after ovulation, these are known as functional cysts.

If cysts grow as a result of anything other than the normal function of the menstrual cycle, they are known as complex cysts.

There are two types of functional cysts:

Follicular cysts occur when the follicle doesn’t rupture or release its egg and instead continues to grow.

The corpus luteum is what the follicle is called after the egg is released. Occasionally fluid builds up inside the corpus luteum, turning into a cyst.

The three types of complex cysts are dermoid, cystadenomas, and endometriomas.

A dermoid cyst is sometimes known as a teratoma. These cysts form from embryonic cells and can contain various tissues such as skin, hair, or even teeth.

Cystadenomas are watery or mucous cysts that develop on the surface of the ovary.

Endometriomas are a potential product of endometriosis and occur specifically when endometrial cells implant on the ovary. Studies have found a relatively high rate of women with endometriomas and low serum values of vitamin D.

Ovarian cysts can sometimes be difficult to distinguish between other symptoms because they can feel like bloating, dull aching pain in the abdomen area (usually localized to one side), or pain in the lower back or pelvis.

Some other signs and symptoms of an ovarian cyst are:

The following symptoms usually arise suddenly and include severe pain, which can be a sign that the ovarian cyst has ruptured:

Ovarian torsion is a more severe condition that can occur if an ovarian cyst grows in such a way that it pulls and twists the ovary. This would require medical attention.

Your health care provider may find a cyst during a pelvic exam, or they may order an ultrasound if you complain of symptoms associated with ovarian cyst.

Root Cause Testing for Ovarian Cysts

Because pregnancy, endometriosis, and pelvic infections are all possible causes of ovarian cysts, a pelvic exam and pregnancy test should be performed to rule out these possibilities. After that, there are a few functional medicine labs that can help get to the root cause of the ovarian cyst.

Because well-balanced hormones are essential for ovary health, A complete hormone panel is a great option to look into hormonal health. These tests assesse multiple sex hormones and related biomarkers, which will be important for looking further into hormone health.

A comprehensive thyroid panel is important since there is a connection between hypothyroidism and ovarian cysts.

Optimal ranges for thyroid markers are preferred because when it comes to thyroid health, you don’t just want to be disease-free (which is what standard ranges will tell you) but instead want to know that the thyroid is in the most optimal health.

Although Vitamin D is called a vitamin, it is actually a hormone. Our hormones all communicate with each other. So, if a hormonal imbalance is suspected, checking Vitamin D levels is an excellent option.

Tribulus Terrestris is an herb that has been shown to reduce ovarian cysts in rat models significantly. If you are on any medications or have any known health conditions, please discuss them with your physician before use.

Chamomile may also be an excellent option for treating ovarian cysts. It has been shown to reduce polycystic ovaries in rats. This study also indicates that chamomile can be healthy for endometrial tissue, which could also assist with endometrioma cysts. Chamomile is mild in flavor and can be easily consumed via capsule or herbal tea.

Because Vitamin D is an important nutrient for endometriomas, supplementing may be an essential part of a healthy hormone regimen, especially during winter months when most people get significantly less sunlight exposure. Testing before and three months into supplementation for Vitamin D levels is a simple, effective way to ensure you are at the proper levels.

Diet is an essential part of ovarian and overall hormonal health. Patients should focus on whole organic food as much as possible and avoid other chemicals in the home. Non-organic foods, cleaning supplies, and personal care products contain endocrine-disrupting toxins. These chemicals can behave like hormones in your body and throw off your hormone balance.

Data from a case-control study on risk factors for benign ovarian cysts conducted in Italy between 1984 and 1994 showed that reducing red meat and cheese and increasing green vegetables helped reduce ovarian cysts.

The Mediterranean Diet has also been studied for polycystic ovarian health and may be an excellent dietary option for benign cysts.

Conventionally speaking, oral contraceptives have been shown to reduce the incidence of ovarian cysts. There is very little research looking at functional medicine treatments for ovarian cysts. However, eating a low inflammatory diet focused on whole foods and high in green vegetables and calcium is an excellent evidence-based start.

Ovarian cysts are common. Getting to the root cause of why the ovarian cyst is there in the first place through functional medicine is the best starting point when developing a natural treatment plan.

Conventional medicine does provide some solutions, such as oral contraceptives or even surgical removal of the cysts when needed. However, the natural treatment of ovarian cysts is possible and even preferable for most women since these treatments are noninvasive and promote general wellness overall. Because we know that the most significant risk factor for an ovarian cyst is a previous ovarian cyst, prevention is key.

Urine
The DUTCH Complete™ is Precision Analytical's most extensive sex and adrenal hormone profile. It also offers an assessment of the daily free cortisol pattern, organic acids, melatonin, and 8-OHdG, all in one simple test. This test cannot be ordered for patients under 12 years of age.
Thyroid Panel Comprehensive
by
Access Medical Laboratories