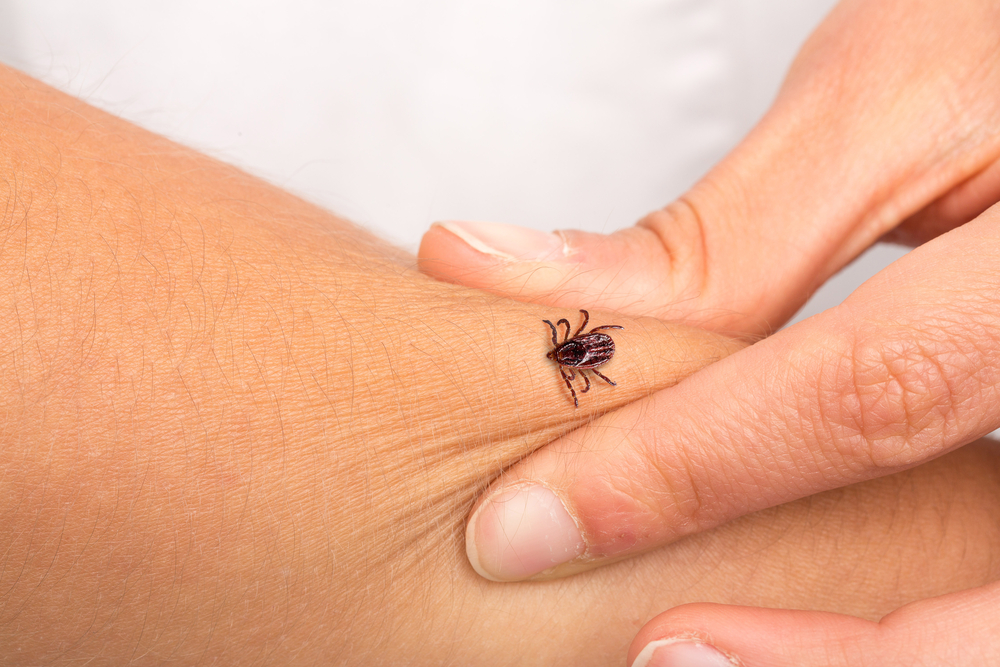 According to the CDC, Lyme Borreliosis, or Lyme Disease, accounts for 77% of vector-borne illnesses in the United States every year (Centers for Disease Control). Lyme disease is caused by the bacteria Borrelia burgdorferi, typically transmitted by a tick, which can affect every area of the human body, hijacking your immune system.

From the years of 2010 to 2018, there were an estimated 476,000 Lyme disease cases diagnosed annually by clinicians, according to the CDC. This estimate was based on insurance claims alone. Researchers suggest that substantial underreporting occurs, and the incidence of this illness could be much higher. (1)

Studies indicate that these bacterial cells can lie dormant and become persistent and difficult to treat when not identified in the acute phase.

Lyme disease in the United States is caused by a bacteria called Borrelia burgdorferi and transmitted through the bites of infected Ixodes, a subset of hard-bodied ticks. These ticks are commonly found throughout temperate North America, Europe, and Asia. (2)

Ticks can attach to any part of the body but are primarily found in hard-to-reach places, such as armpits, groin, or scalp. Although sometimes you can spot the tick, most adult humans are bit by immature ticks called nymphs. Nymphs are tiny (less than 2mm) and usually feed in the spring or summer months.

According to the CDC, the ticks must be attached for 36-48 hours or more before the Lyme disease bacterium can be transmitted. In the United States, Borrelia burgdorferi is the leading cause of Lyme disease.

In Europe, there are thought to be over five different species that can cause Lyme disease, and those ticks may transfer the infection quicker.

How Widespread is Lyme Disease in the United States?

"IGeneX Laboratory has discovered Lyme disease in all 50 states. Lyme disease was once very concentrated in the Northeast and Upper Midwest but has spread to all parts of the United States over the past twenty years. The map below illustrates the counties where patients have been diagnosed with Lyme disease."

Lyme disease is known as “the great imitator” because the symptoms can vary and overlap with other common health complaints, making the diagnosis difficult. Many people go through a flu-like illness and erythema migrans rash in the first stage.

The most common symptoms of early Lyme disease are:

As the bacteria (spirochetes) spread from the bite site, additional symptoms and manifestations can occur, such as:

In the third stage, patients may also experience neuroborreliosis or Lyme arthritis without proper treatment.

There is a characteristic lesion that can present in Lyme disease. This is known as the erythema migrans (EM) rash. It can develop 3-30 days after the tick bite, and the appearance can vary greatly. It is often a circular, red, expanding skin-containing lesion that may or may not have clearing in the center. Sometimes it can be very noticeable and sometimes challenging to see.

Up to 30% of individuals diagnosed with Lyme disease do not develop the EM rash.

Almost 30 years ago, clinicians began to report that some Lyme disease patients have persistent nonspecific symptoms after receiving adequate treatment. (18)

In 2006, the Infectious Diseases Society of America created the term “post-treatment Lyme Disease syndrome” or PTLDS: clinical symptoms persisting at least six months after treatment for Lyme disease in people who otherwise seemed to tolerate treatment, didn’t have re-infection, or relapsed. There is a need for more research to understand how to treat these patients best.

How is Lyme Disease Diagnosed?

Diagnosing Lyme disease is not always easy. As mentioned above, the illness is known as "the great imitator," as some symptoms imitate other diseases or conditions of the human body.

Clinicians need to consider the following when assessing a patient for Lyme disease:

In the acute phase, if an individual has all the most common symptoms and the erythema migrans (EM) rash, they are considered "infected" without the need for a blood test verification. These patients are automatically prescribed antibiotic treatment.

Those who do not have a rash but have a history of exposure or symptoms consistent with the diagnosis sometimes still are instructed to undergo two-tiered testing. The first test is called an ELISA, then, if positive or indeterminate, a Western blot.

Clinicians and researchers consider these tests to have serious problems. The criteria for testing focus on the antibodies developing. Typically, antibodies can develop from a few days to 12 weeks. This means there is a high false-negative testing outcome in early Lyme patients.

The two-tier testing was developed for surveillance purposes and should not be used alone for diagnosis. This testing is also challenging to use in clinically evaluating persistent symptoms of an individual who previously used antibiotic treatment.

Standard testing for Lyme disease is the above-mentioned 2-step tier system consisting of the ELISA test and, if that is positive, the Western blot. These tests can be challenging to detect early disease because Lyme disease antibodies can take up to 12 weeks to develop.

Due to the low sensitivity rating in ELISA and Western Blot tests, the U.S. Food and Drug Administration was cleared to market four other tests with new indications to diagnose Lyme disease.

Functional medicine has come a long way with other types of testing that may be beneficial in diagnosing Lyme Disease. These commonly ordered specialty labs look for multiple forms of the Borrelia bacteria and co-infections that the ticks can carry.

Typically, individuals with Lyme disease are likely to have co-existing infections due to being bit by ticks that harbor other diseases.

The most common co-infections include Babesiosis, Bartonella, Ehrlichiosis, Rickettsia rickettsii, and Anaplasma.

Soft ticks also transmit another disease called tick-borne relapsing fever (TBRF). It is vital to test for this as well.

The most innovative testing for Lyme disease comes from specialized labs that have developed specific lab tests to aid in diagnosis.

IGenex Inc. is a popular test used in functional medicine testing. IGenex has a dedicated research and development team of tick-borne disease experts who are relentlessly focused and committed to developing the most precise and effective diagnostic tests for Lyme disease, Tick-Borne Relapsing Fever, and other tick-borne diseases. They are also an active part of the Lyme community.

‍Summary of When to Choose Which Test

The Lyme IgM/IgG can also be ordered in a combined test.

Vibrant Wellness is the second most popular laboratory with Lyme disease detection on the Rupa Health portal. Their tests are run on a microchip with unrivaled sensitivity and specificity. They also pride themselves on educating the patient and providers to support their health journey.

*Note: These tests can be done via whole blood or blood spot.

*Note: These tests cannot be ordered for patients under two years of age.

Another popular Lyme Disease testing option is through Bio reference laboratories. Bio reference claims itself as the largest full-service specialty laboratory in the United States that allows patients and providers to make confident healthcare decisions.

Other Tests Your Practitioner May Run

Good gut health is vital for lowering inflammation, absorbing essential nutrients, and fighting off disease. A comprehensive stool test looks at digestion and absorption, inflammation and immunology, and dysbiosis (the balance of good vs. bad bacteria). All of these are an important part of setting the foundation for optimal health.

Your medication or your illnesses may deplete essential nutrients. Your doctor can run blood tests to determine what nutrients you lack and suggest supplements to help your body replenish.

The goal is to catch the illness in the early/acute phase and treat it with oral antibiotics to kill the bacterial infection.

In adults and children over the age of 8, this usually consists of Doxycycline and amoxicillin or cefuroxime for pregnant or breastfeeding women.

If the disease spreads to the central nervous system, intravenous antibiotics are sometimes recommended.

Treatment of Lyme disease can vary, depending on the stage and length of time it has been going on. There is controversy around chronic Lyme disease and post-treatment Lyme disease syndrome.

Diets for Lyme disease can be tricky depending on patients' needs. Dietary choices depend on the patient's microbiome, food allergies and intolerances, possible nutritional deficiencies, inflammation levels, and medications.

A study in 2018 identified ten essential oils that had better activity against B. burgdorferi cells at the stationary phase than current antibiotics for treating Lyme disease. (20) These oils include garlic, allspice, myrrh, hydacheim, and Litsea Cubeba. Additionally, Cinnamaldehyde is an active ingredient of cinnamon bark oil that has potent activity against B. burgdorferi.

A study in 2020 tested a panel of botanical and natural products used in Lyme patients and found several to be highly active in vitro against stationary phase B. burgdorferi and may be helpful in the treatment of Lyme disease.

Nutritional supplements can strengthen the immune system in any infection and may be beneficial to help with Lyme disease. Nutrient supplementation must be personalized to the individual. Practitioners may run a nutritional panel to see how well the patient is breaking down and absorbing vitamins and minerals and have patients fill out a food journal to see where patients are lacking in their nutrition.

Those patients diagnosed with Lyme and associated diseases (LAD) have an increased risk of suicide. Multiple studies link infections, particularly chronic infections, and the associated inflammation with an increased risk of suicidal behavior. It is vital to address this aspect of treatment by hiring a professional counselor or therapist or finding ways to decrease emotional stress. Many studies have shown mindfulness and meditation to be of use in chronic health conditions and pain syndromes.

The goal of the treatment of Lyme disease is to identify and treat the illness in the acute phase before it can spread. It can spread to other body parts and be more challenging to treat if not identified. The most important part of treatment is determining precisely what infections are involved and how that individual patient can feel better in the safest and quickest possible way.

The diagnosis and treatment of Lyme disease is becoming easier with more advanced testing and more research on expanded treatments.

There is still a lot unknown about chronic Lyme disease and post-treatment Lyme disease syndrome (PTLDS). Advanced testing through functional labs can give patients and their practitioners a broader, more comprehensive view of their Lyme disease picture.

There are about 476,000 people diagnosed with Lyme disease in the United States, but this number becomes cloudy when thinking of those with unidentifiable signs and symptoms who are not identified. More research needs to be done to figure out a way to catch everyone with Lyme disease, acute and chronic, so the long-term consequences do not contribute to a difficult journey towards healing.

Website
Functional Medicine Physician Assistant, Reiki Practitioner, and Healer. Through her own health journey, she is able to connect with patients on a deeper level. She enjoys working with hormonal imbalances, mental health issues, chronic fatigue, and gut imbalances.
Order from 25+ labs in 20 seconds (DUTCH, GPL, Genova & More!)
We make ordering quick and painless — and best of all, it's free for practitioners.
Sign up free
Browse the lab catalog