Diagnosing Eosinophilic Esophagitis: 10 Symptoms to Look Out For 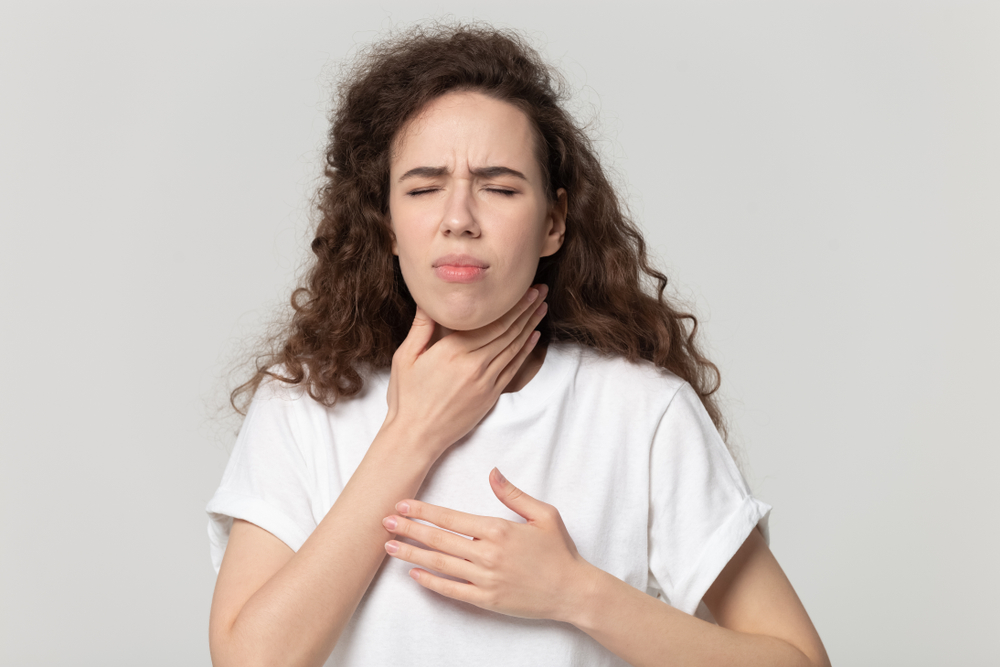 Most people have experienced taking too big of a bite of food and having that lump of food feel as though it gets stuck in their throat as they swallow. This trouble with swallowing - known as dysphagia - can often be resolved with a quick cough or a large swig of water. For those struggling with Eosinophilic Esophagitis (EoE), trouble swallowing can be a daily struggle, and coughing or sipping water may not immediately alleviate their symptoms.

Eosinophilic esophagitis is an immune-based disorder that impacts the esophageal tissue. It affects 1 in 2000 people each year. Thankfully, a functional medicine approach to eosinophilic esophagitis, including dietary changes, medications, supplements, and more, can effectively relieve symptoms.

What is Eosinophilic Esophagitis?

Eosinophilic Esophagitis (EoE) is a chronic, immune-mediated disorder of the esophagus, characterized by the infiltration of eosinophils (a type of white blood cell) into the esophageal tissue. In EoE, there is so much immune activity in the esophagus that the esophagus becomes inflamed, irritated, leaky, and can even rupture, leading to excessive bleeding if left untreated for many years. This condition impacts the esophagus' ability to help with swallowing foods and liquids, and people who have it frequently experience issues with swallowing and throat or chest pain. Trouble swallowing can become so severe in EoE that people can choke or develop food impactions, which are medical emergencies.

Eosinophilic Esophagitis (EoE) is a chronic, immune-mediated disorder of the esophagus. It's unclear what triggers the immune system in EoE. However, it is known that a combination of food allergies and sensitivities, mast cell degranulation, genetic predisposition, and environmental exposures can contribute to it.

Specifically, disordered TH2 immunity appears to be at the root of EoE. Increased numbers of T cells are found in the esophageal mucosa of people with EoE, as are increased levels of interleukins and tumor necrosis factor-alpha (TNF-α). People with EoE are more likely than others to have close family members with autoimmune disorders.

Finally, changes to the microbiome are common in people with EoE, including small intestinal bacterial overgrowth (SIBO).

How to Test for Eosinophilic Esophagitis

Finding the root cause of eosinophilic esophagitis includes testing beyond the diagnostic imaging/procedures listed above. Biomarkers that can be examined through blood work include:

How is Eosinophilic Esophagitis Treated?

Dietary changes to improve EoE include the Step Up Diet and food elimination diets aimed at reducing the amount of immune-triggering foods a person ingests. A Step Up Diet typically consists of the following stages:

Eosinophilic esophagitis can impact swallowing and make life stressful for people who suffer from it. But, with the right team and interventions, it can be a smooth path to recovery. A functional medicine approach to eosinophilic esophagitis that includes pharmaceuticals, procedures, nutrition, herbs, supplements, microbiome support, and more can be highly successful in relieving symptoms so that you can thrive.

Stool
The GI Effects® Fundamentals profile provides a cursory evaluation of the overall health of the GI tract, including insights into digestion/absorption, inflammation/immune response, gut microbial metabolites, and potential dysbiotic or pathological organisms. This is the 1-day version of the test; it is also available as a 3-day test.
88 Food Antigen IgE
by
Infinite Allergy Labs